SHUNNED AND DANGEROUS by Laura Bradford  #3 in An Amish Mystery series.

Living in the small town of Heavenly, Pennsylvania, Claire Weatherly has come to admire the Amish for their wholesome, honest way of life. But she also knows that nothing is as simple as it seems—especially when murder disturbs the peace.

Claire has always been game for a good puzzle, so when she hears that Mose Fisher has made one of his famous corn mazes, she can’t wait to walk the paths and test her skill. But she’ll have a much more serious puzzle to solve when, deep inside the maze, she discovers the body of Amish dairy farmer Harley Zook.

It won’t be easy for Detective Jakob Fisher to investigate a murder on his own father’s farm —not after being shunned by the man for leaving the Amish community and becoming a cop. With Mose himself as a suspect, and old family secrets cropping up, it’s up to Claire to help catch the killer before she finds herself at a dead end. 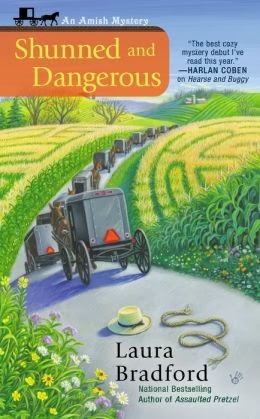 What a joy it was to be back in Heavenly, Pennsylvania with Claire, Diane, Jakob, Benjamin, Esther and friends. Each time I’m blessed enough to visit, I am lulled into a sense of peace and contentment. I truly find myself wanting to stay apart of this idyllic community. Well, until there’s another body found. Oh, who am I kidding? I’d still take my chances!

In this third installment of Laura Bradford’s Amish Mystery series, murder once again comes to Heavenly. This time it claims the life of Amish dairy farmer Harley Zook. But who would want Harley dead? And why? Ms. Bradford crafts an intricate tale of anger, greed, prejudice and revenge that gives the reader much to think about before she leads us to the conclusion and the surprising answers to these questions
.
Along with the murder mystery, readers are also treated to an uplifting story of love, friendship, helpfulness and forgiveness between characters old and new to the series.

As with HEARSE AND BUGGY & ASSAULTED PRETZEL, we also get a glimpse into the world of the Amish and their traditions. It’s clear Ms. Bradford has done her research and that she has a true fondness for these people.

If you haven’t read this series yet, do yourself a favorite and start it now! If you have read the first two books in this series, SHUNNED AND DANGEROUS is exactly what you've been waiting for!