From selling camisoles to solving crimes, the ladies of the Sweet Nothings lingerie shop in Paris, Tennessee, will make this Valentine’s a day to remember…

For Valentine’s Day, Emma Taylor and her aunt Arabella have organized a special evening for men only to shop for their sweethearts in the Sweet Nothings lingerie shop, complete with champagne and hors d’oeuvres. But when a former valentine shows up, Aunt Arabella is not her usual bubbly self.

Art dealer Hugh Granger is still a charmer, though. He invites the women to a ball he’s having to celebrate his birthday and his return to Paris, Tennessee. But when Granger is pushed from the balcony, it paints a sinister picture for Aunt Arabella, who gets framed…for her old flame’s murder. 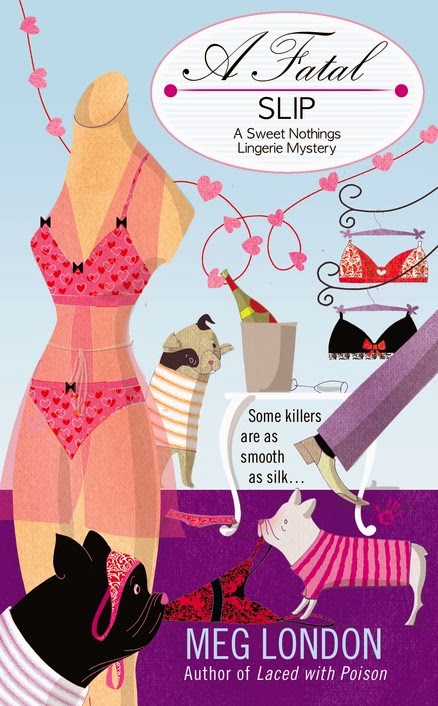 Brava to Meg London for out doing herself with A FATAL SLIP and making this series a must have for any mystery fan.

MURDER UNMENTIONABLE. While reading the second book, LACED WITH POISON, I knew I was in love. Having said that, now that I have read book number three, A FATAL SLIP, put a ring on my finger and seal the deal because I am never leaving this series.

Ms. London has again provided us with characters that we care about. This installment of the series is filled with more mystery and intrigue than the first two books, something that I would have said was impossible. The main plot is focused on who killed Hugh Granger and Emma trying to clear Aunt Arabella's name. But there are several sub plots and discoveries that had my head spinning (in a good way) and wondering what would happen next.


Get to your local bookstore or online book seller and buy A FATAL SLIP now. If you haven't read the first two books in the series, that's okay. You wont have any problem following the story. But then again, while you're buying this book, get the first two and read them all! And pick up a set for friend. They'll love you for it!
Posted by Lisa Ks Book Reviews at 4:50 PM