A SPOONFUL OF MURDER

Winter is big business in small-town Snowflake, Vermont. Tourists arrive to hit the ski slopes--and what could be more satisfying after a chilly day of carving powder than a steaming bowl of soup?When Lucky Jamieson inherits her parents' soup shop, By the Spoonful, she realizes it's time to take stock of her life. Should she sell her parents' house or move in herself? Does she really want to run a restaurant business? And what about her grandfather Jack, who seems to be showing signs of Alzheimer's?But her life decisions are moved to the back burner after an icy blonde tourist is found frozen to death behind the soup shop. and Lucky is bowled over when her soup chef, Sage DuBois, is led out of the kitchen by the police. As suspicion and speculations snowball, Lucky decides that the only way to save her employee and her business is to find out herself who iced the tourist--and landed her chef in the soup...Recipes included! 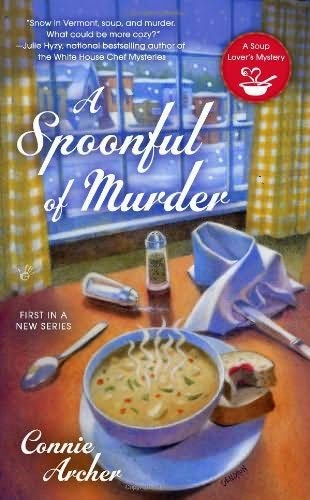 In A SPOONFUL OF MURDER, my first visit to Snowflake, Vermont was a delightful one. You know, with the exception of a dead body. I thoroughly enjoyed meeting Lucky Jamieson, her grandfather Jack, the entire staff of By the Spoonful,

as well as Dr. Elias Scott and Mayor Elizabeth Dove.

The entire story held my attention and the search for the killer kept me guessing. There were plenty of suspects to go around and so little to know about t
he victim, that anything was possible.

They were a few typos or mistakes in the writing, but that happens to anyone and should not be held against the author since it goes to so many others to be checked over and approved and they missed it as well. But the story was so interesting and I was invested enough in knowing who the killer was, that those minor glitches didn’t bother me. Maybe because my reviews normally have flaws and I am the self proclaimed queen of typos.
We’re all human. It happens.

That being said, true cozy mystery fans will really enjoy this book. The setting, the people, and the storyline are just the reasons why we read cozies in the first place.

Even a town called Snowflake, Vermont, has a summer season. In August, Lucky Jamieson’s By the Spoonful serves chilled soups—celery and green onion, cream of asparagus—and salads. The shop also serves as a gathering place to talk about cold-blooded murder…A protest to stop the construction of an ugly car wash in the middle of the town’s picturesque Village Green is interrupted by the discovery of a skeleton that may date back to the Revolutionary War. While the remains pose a historical mystery, a present-day murder shakes the town to its core when local auto mechanic
Harry Hodges is found dead in his shop.Straining the patience of Chief of Police Nate Edgerton, Lucky soon finds herself in the soup again when her dear friend Elizabeth, the Mayor of Snowflake, goes missing. No matter how much trouble she has to stir up, Lucky is determined to use her noodle to uncover a killer and recover her friend…
Recipes included! 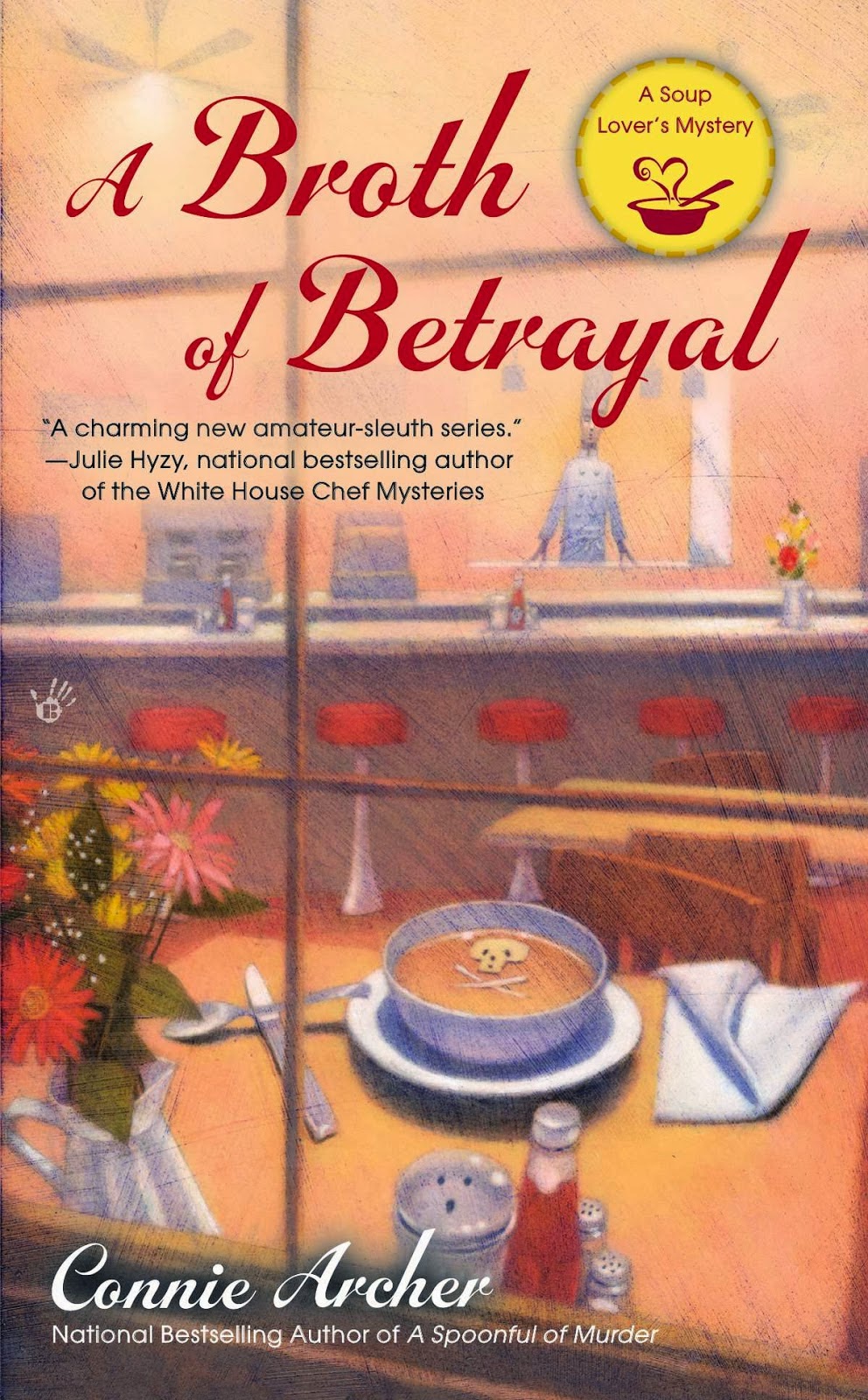 It was so good to be back in Snowflake, Vermont. A BROTH OF BETRAYAL reconnected me with all the delightful characters that I got to meet in A SPOONFUL OF MURDER. Lucky Jamieson and her grandfather Jack, as well as the rest of the characters from the first book, were as I remembered them, but even more fleshed out.

I enjoyed the storyline of the skeleton from Revolutionary War days and the connection it had to someone in present day Snowflake. The mystery of who killed auto mechanic Harry Hodges was well written and not an easy one to solve. And if two mysteries aren’t enough for you, the Mayor of Snowflake, Elizabeth Dove, goes missing! As the readers we get to know where she is, but her friends and co-workers have no idea. My only problem with this part of the story…for Elizabeth to be Mayor, it took too long for anyone to notice she was missing and do something about it. Putting that aside though, it was interesting to see all the storylines play out and to finally get to the reveal(s).

I liked A BROTH OF BETRAYAL and the characters enough to read the next book in the series.

Snowflake, Vermont, is known for its skiing in winter—and its soup all year round, thanks to Lucky Jamieson’s By the Spoonful. Autumn brings golden leaves, pumpkin rice soup, the annual Harvest Festival…and murder. Lucky’s soup shop is busier than usual this October, with groups of itinerant travelers in town to work the Harvest Festival. One newcomer seems to take a particular interest in Lucky’s young waitress, Janie, spying on her from across the street. Is the stranger stalking Janie? After an unidentified man is found murdered in a van by the side of the road, simmering suspicions about the travelers are brought to a boil. But when Janie is put in harm’s way, Lucky must join forces with the travelers to turn up the heat on a killer… Recipes included!

I’ve enjoyed my previous stays in Snowflake, Vermont so much that I just had to come back again when A ROUX OF REVENGE came out. And this was my most favorite visit of all. I was thrilled to be back with Lucky Jamieson, Jack her grandfather and the residents of this lovely town. Lucky’s soup shop, By the Spoonful was as welcoming as always with wonderful soups and sandwiches. Oh yeah, there was another dead body too!

I truly enjoyed learning more about Janie, Lucky’s young waitress. I was so intrigued as to how the mystery of the dead stranger in the van was going to tie into the storyline of the man watching Janie and the travelers in town who came
to work at the annual Harvest Festival.

Ms. Archer weaved an amazing story in this third book in the Soup Lover’s series. I found myself constantly surprised with every new twist in the book. I was so caught up in the story that I didn’t want to put the book down.

A ROUX OF REVENGE has assured there will be a fourth installment in this wonderful series. And I for one am looking forward to it!

Connie Archer is the national bestselling author of the soup lover's mystery series set in Snowflake, Vermont. A Spoonful of Murder, the first in this series from Berkley Prime Crime was released in August 2012. A Broth of Betrayal was released in April 2013.
Connie was born and raised in New England and now lives on the other coast.
Visit her website at http://www.conniearchermysteries.com and her blog at www.conniearchermysteries.com/blog. You can also find Connie on Facebook at http://www.facebook.com/ConnieArcherMysteries and Twitter @SnowflakeVT.