SUGAR AND ICED by Jenn McKinlay

Sugar and spice and murderous vice.
That’s what pageants are made of…Normally Melanie Cooper and Angie DeLaura wouldn’t be caught dead at a beauty pageant, but when Mel’s mom asks them to provide cupcakes for the seventy-fifth annual Sweet Tiara contest as a favor for her best friend, they can’t say no. Plus, between cooking up a daily display for the three-day event and sponsoring a cupcake creation challenge for the participants, Fairy Tale Cupcakes will get great publicity.But the world of pageants is even hotter than Mel’s kitchen. A high-strung judge and a pushy stage mom target Lupe, a young friend of Mel and Angie’s, at the competition and aim to take her out—by any means necessary. When the same judge shows up dead underneath Mel and Angie’s cupcake display, Lupe is crowned the lead suspect. Now Mel and Angie will have to find the real killer quickly or Lupe may be strutting the catwalk in prison pinstripes…

SUGAR AND ICED by Jenn Mckinlay Book 6 in the Cupcake Bakery Mystery series.

To say I love this series would be an understatement. It is by far my favorite
cozy mystery series.

Jenn McKinlay has the gang from Fairy Tale Cupcakes taking on a beauty pageant in this story. Not only are they building beautiful cupcake towers to display at the pageant, they’re baking the cupcakes that the contestants themselves invent. On top of that, they are there for their young friend Lupe who enters the pageant to win a scholarship. Of course they didn’t count on Lupe and one of the judges having a very public argument in the lobby of the hotel hosting the event. And they sure didn’t expect that same judge to be found dead under the table that holds Melanie and Angie’s cupcake tower! Making matters worse…Lupe is the prime suspect! Once again, Mel and the crew find themselves trying to find a killer.

Ms. McKinlay’s characters grabbed me on the first page of this story and held on to me until the last. No, that’s not right. They held me tight long after the book was done. Just as they have in every book in the series.

You wouldn’t think someone could take a murder mystery and make it laugh out loud funny. Jenn McKinlay does it with an ease that I envy. Her witty sense of humor carries over into her writing. In SUGAR AND ICED she once again blends that humor wonderfully with an excellent storyline and a good, tightly crafted mystery that will keep you guessing even after you think you know who the murderer is.

If I could be in any fictional place I wanted out of all the cozy mysteries I read, I would have to pick working at Fairy Tale Cupcakes in not so fictional Scottsdale, Arizona. This is saying a lot since I really don’t do well in hot temperatures. But I would be willing to suffer through the hottest Scottsdale summer for the chance to hang out
Mel, Angie, Tate, Joe, Oz, and Marty at the bakery.
Heck, I’d even risk it knowing how high the body count is!

If you haven’t read the Cupcake Bakery series, please don’t wait any longer. 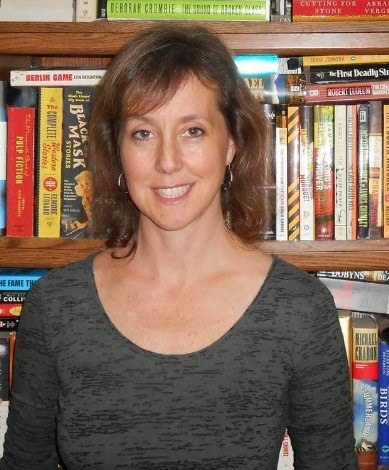 Jenn lives in sunny AZ in a house overrun with kids,
pets and her husband's guitars.