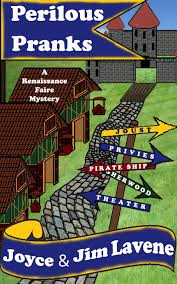 Perilous Pranks ﻿a Novella of 22,000 words in the Renaissance Faire Mystery series PLUS the first chapter of Murderous Matrimony, Book Six coming in November 2013.

Wanda Le Fey is dead, and Renaissance Faire lover, Jessie Morton, looks suspiciously like the person who killed her. Jessie was simply returning the prank Wanda played on her by dyeing the other woman blue. It wasn’t her fault that Wanda was also stabbed in the chest by a sword as she tried to get out of her shower. Now Wanda’s blue ghost is prodding Jessie to find her killer. And a dead Wanda is far worse than a live Wanda.﻿
Jessie Morton had pulled the perfect revenge prank on Wanda LeFey. A blue dye pack in Wanda's shower head! That would teach her to glue Jessie's dress to a chair while Jessie was still in it. And finding Wanda blue in her cottage should have been a thrill and it would have been if Wanda hadn't been dead! As the prime suspect, Jessie set outs to find Wanda's killer. Little did she know she would be aided but Wanda's blue ghost!
This novella in the Renaissance Faire Mysteries is a wonderful addition to a great series. The unlikely team of Jessie and Wanda is hysterical. As with the other books in this series there are lots of insights into the workings and fun of a Ren Faire.
I really enjoyed this story. It had a great flow. I never guessed the killer so the reveal was a nice surprise!
Makes me want to go visit my local Ren Faire again this year.
PERLIOUS PRANKS is a great way to keep readers happy until the release of the next full length novel in the  Renaissance Faire Mysteries---MURDEROUS MATRIMONY in November 2013.
PERILOUS PRANKS is the first novella in the Renaissance Faire mystery series by Joyce and Jim Lavene. This follows the first five bestsellers in the series: Wicked Weaves, Ghastly Glass, Deadly Daggers, Harrowing Hats, and Treacherous Toys. Each book also includes a craft from the Renaissance. The next book is Murderous Matrimony, which will showcase the wedding of Ren Faire enthusiast, Jessie Morton, to hunky bailiff, Chase Manhattan. That book will be out in November 2013. For more information on the series: www.renaissancefairemysteries.com.
﻿