Another 3 in 1 review. Written by Lee Hollis AKA brother and sister writing team Rick Copp & Holly Simason, I really enjoyed the Hayley Powell Food and Cocktails Mysteries. The three titles are as follows. 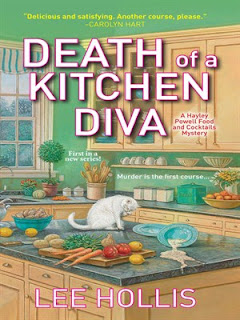 Single mom Hayley Powell is barely keeping her leaking roof over her head when her boss at the "Island Times" gives her a new assignment---taking over the paper's food column. Hayley's not sure she has the chops---she's an office manager, not a writer, even if her friends clamor for her mouth-watering potluck dishes. But the extra income is tempting, and Hayley's chatty first column is suddenly on everyone's menu---with one exception.

When rival food writer Karen Appelbaum is found face-down dead in a bowl of Hayley's creamy clam chowder, all signs point to Hayley. To clear her name, she'll have to enlist some help, including her BFFs, a perpetually pregnant lobster woman, and a glamorous real estate agent. As she whips up a list of suspects, Hayley discovers a juicy secret about the victim---and finds herself in a dangerous mix with a cold-blooded killer. 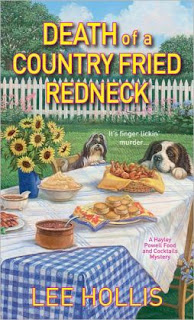 Local food and drink writer Haley Powell thinks she's done solving murders in scenic Bar Harbor, Maine. But when a taste of the South comes to New England, Haley's following another recipe for disaster...
As a single mom, Hayley Powell already has a full plate--she's got deadlines to make and a teenage daughter with eyes for an aspiring singer-songwriter. But when country music superstar Wade Springer rolls into town, Hayley spies an irresistible side gig: personal chef to her all-American idol. After he tries her home cooking, Wade's so impressed that he hires her on the spot--and invites her to dine with him alone.

Hayley and Wade are hitting all the right notes. . .until a body turns up. Wade's tour bus was torched overnight and a roadie named Mickey Pritchett came out well-done. But the real cause of death isn't barbecue: Mickey was shot, his mouth stuffed with one of Hayley's trademark chicken legs. An ornery drunk, Mickey had already made plenty of enemies in town, but Wade's reputation is on the rocks. Hayley reckons it's up to her to settle this mess--a charbroiled mystery with all the fixin's. 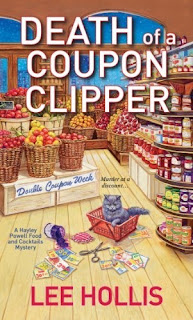 Hayley Powell, food and cocktails columnist for Bar Harbor's Island Times, is. . .well, kind of broke. So when she's selected for that extreme coupon-clipping reality game show coming to town...
...she's thrilled, especially when her competition is nasty nurse Candace Culpepper. But when Haley stumbles across a face-down-in-the-snow Candace—scissors gleaming between her shoulders—she knows the next thing she'll be selected for will probably be a police line-up.

Meanwhile, though Hayley's BFF Mona was only joking about "taking Candace out," Bruce Linney, the Island Times crime reporter, definitely isn't laughing. And what about the smarmy, cold-hearted host of the show, Drew Nickerson, who may have been having a steamy affair with the intentionally-iced nurse? Hayley needs to cut to the chase and find the killer. Everything may hinge on a stray coupon, but Hayley better keep her eyes on the real grand prize: staying out of permanent cold storage!
While the first in this series was my favorite, I enjoyed all three of these books and look forward to the fourth in the series, Death of a Chocoholic, due to be released January of 2014.
Author Lee Hollis (Mr. Copp & Ms. Simason), has created a delightful protagonist in Hayley Powell. Her exploits in these three tales had me laughing out loud more times then I can count. Hayley is a very real, less than perfect woman, making her way in life raising her two children and working her job at the newspaper. I liked the situations she finds herself in. Hayley is helped through her adventures by her best friends Mona, an always pregnat lobster boat captain and Liddy, a high class real estate agent. Throw into the mix her brother Brain owner of the local bar, his partner Sergio the chief of police, Hayley's children, her dog Leroy (named for her NCIS TV crush Mark Harmon) Sal the editor of The Island Times and Bruce the smarmy crime reporter at the paper---you have a very well rounded cast of characters. Add to that, Bar Harbor, Maine as the beautiful setting and you have winning combinations.
With fast paced plots, interesting twists and solid story lines, this series is destined to be a favorite among readers.
Recipes lovers, you won't be disappointed. Every book features Hayley's column Island Food & Spirits, which includes seven recipes from Hayley's kitchen along with cocktails to enjoy while preparing your meal! ﻿