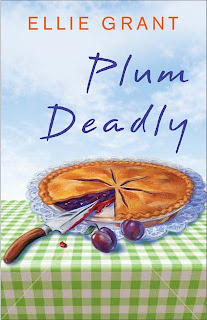 Who could resist such pies? Who would even want to resist the pie shop that makes them? Certainly not the residents of Durham, North Carolina, and the little bakery and café called Pie in the Sky is one of the most popular meet-up places in town.

Unjustly accused of cooking the books, Maggie Grady is forced to retreat from her high-flying New York financial career to the town where she grew up. Her aunt Clara greets her with open arms and a job at the family-owned business that has baked the best pies in the South for over forty years. Unfortunately, while Maggie is determined to return to banking, her reputation there seems permanently in the pits. That is, until her old boss, Lou, visits with news that he’s found the real crook. Before he can reveal the details, though, Maggie finds his body right behind the pie shop.

With only her own word that Lou planned to exonerate her, Maggie is in the spotlight. The police seem to suspect that Aunt Clara’s damson pie may not be just dangerously delectable, but downright deadly. Maggie doesn’t just have her own name to clear; she has to make sure that her aunt’s beloved business isn’t harmed, either. Yummy local reporter Ryan Summerour appears eager to help, and Maggie can’t help hoping that it’s not just the police who find her a person of interest—but Ryan, as well. She’d thought it challenging to make the perfect pie crust that Aunt Clara demands, but that turns out to be nothing compared with finding a murderer. . . .


When a murder victim, Maggie Grady's former boss Lou, is found on the pie shop's back step Maggie looks like prime suspect #1. But with Lou about to clear Maggie's name on embezzlement charges with an announcement of the real thief and an unsavory business man trying a little too hard to buy Aunt Clara's shop at any cost, there are plenty of other suspects to go around!


This first in a new series is a delicious threat. Maggie and her Aunt Clara are wonderful new characters. I had a great time hanging out with them in their pie shop Pie In The Sky. I don't even eat pie and it made me hungry! A fast and entertaining read, I was kept guessing until the surprising conclusion of this great book. I really look forward to the next installment in this new and hopefully long running series.


NOTE: Recipe lovers will be thrilled with the recipes included for flaky pie crust and 3 tasty pies!
Posted by Lisa Ks Book Reviews at 4:17 PM