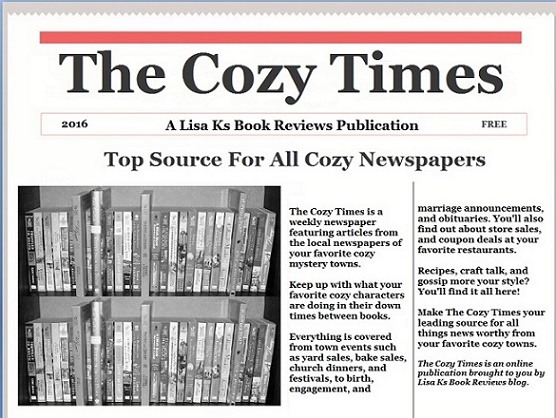 This is a weekly online publication focused on connecting cozy mystery readers to favorite cozy characters by way of their town's newspapers.

The Cozy Times will be available Wednesdays right here on Lisa Ks blog.
There will also be weekend editions, and special editions from time to time. So keep watch.

Today The Cozy Times is featuring the
The Cranberry Cove Courier

The Courier had one particular article that I thought you all would enjoy.

A series of robberies has been rocking Cranberry Cove for the last two weeks.

“We don’t bother to lock our doors around here,” said Bart Bylsma, owner of Bart’s Butcher Shop.  “It’s always been such a safe place.”

“A number of my hair clips are missing,” said Hennie VanVelsen, one of the proprietors of Gumdrops on Beach Hollow Road.

“Yes,” commented her identical twin Gerda.  “We’re quite distressed about it.  One of them came from our great-grandmother Reika.  She brought it with her all the way from the Netherlands.”

None of the items taken have been of much value, which makes the case even more puzzling.

“I don’t know why someone would steal my new lipstick,” said Nora Taylor, a resident of Cranberry Cove.  “I know I put it on the bathroom counter, and now it’s gone.”

Police have been looking into these mysterious thefts and until recently have come up empty handed.

“Thanks to diligent police work by the Cranberry Cove Police Force,” said Detective Tammy Stevens, “We have a break in the case.” She paused and consulted her notes.  “It seems that we have a cat burglar on the loose.  Mr. VanDyken, who owns a farm out on Bridge Road, has a cat Shadow who likes to wander at night.  Mr. VanDyken recently found all of the stolen items hidden behind his sofa.”

Residents have declined to prosecute and the police have let Shadow off with a warning providing the missing items are returned forthwith to their rightful owners.

*****
Why pay newsstand prices when you can have The Cranberry Cove Courier delivered to your door at a discounted price? 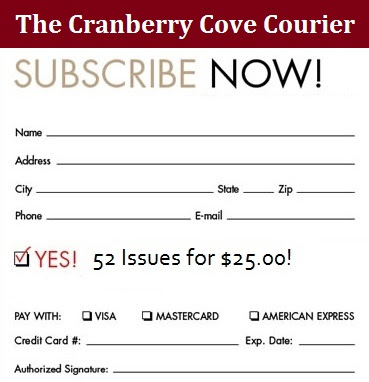 *****
So dear Cozy Times readers, keep those doors, windows, and doggy doors locked! You to may have a cat burglar roaming you town!

That's this week's edition of
The Cozy Times
I hope you enjoyed!

To learn more about the charming town of Cranberry Cove and it's residents, read the
Cranberry Cove Cozy Mystery series
by author
Peg Cochran. 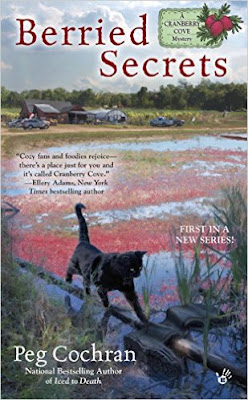 It’s cranberry picking time—in an all-new mystery series from the national bestselling author of the Gourmet De-Lite Mysteries…When Monica Albertson comes to Cranberry Cove—a charming town on the eastern shore of Lake Michigan—to help her half-brother Jeff on his cranberry farm, the last thing she expects to harvest is a dead body.It seems that Sam Culbert, who ran the farm while Jeff was deployed overseas, had some juicy secrets that soon prove fatal, and Jeff is ripe for the picking as a prime suspect. Forming an uneasy alliance with her high-maintenance stepmother, Monica has her hands full trying to save the farm while searching for a killer. Culbert made plenty of enemies in the quaint small town…but which one was desperate enough to kill?INCLUDES DELICIOUS RECIPES! 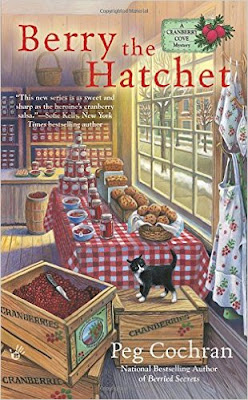 Cranberry farm owner Monica Albertson is once again bogged down in murder in the second Cranberry Cove mystery from national bestselling author Peg Cochran.The entire town of Cranberry Cove is popping with excitement. Monica Albertson is baking cranberry goodies by the dozen and shopkeepers are decking out their storefronts for the first annual Winter Walk—an event dreamed up by the mayor to bring visitors to the town during a normally dead time of year. But it’s the mayor who turns up dead during the grand opening ceremony, his lifeless body making its entrance in a horse-drawn sleigh. Monica’s mother and stepmother quickly become the prime suspects when it’s discovered that the mayor was dating both of them, and to make things worse, her half brother Jeff uncovers a clue buried near one of the bogs on Sassamanash Farm. Now it’s up to Monica to find out who really put the mayor on ice. INCLUDES CRANBERRY RECIPES

Is there a cozy town you'd like to see featured in
The Cozy Times?
Please let me know in the comments section.