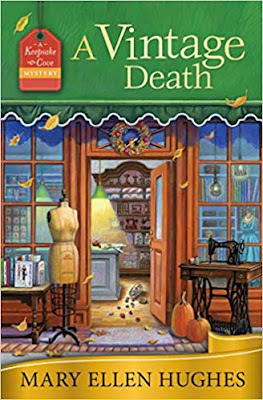 Callie Reed has put together a special event, but a killer is ripping it apart at the seams
As the new owner of a music box store in Keepsake Cove, a quaint town full of collectible shops on Maryland's Eastern Shore, Callie Reed is eager to get more involved in her community. So she volunteers to plan the fall street decorations and welcome a visiting author who's come for a special book signing. But the celebratory mood is cut short when the local B&B owner is found dead, killed with a pair of vintage scissors.
Suspicion is cast on the victim's estranged wife, Dorothy, who owns Keepsake Cove's vintage sewing shop. Callie is sure Dorothy is innocent, and the visiting author agrees. Together, they begin their own investigation, only to discover that many people in Keepsake Cove have secrets. Secrets that are worth killing to keep.

LKBR:  Thank you for being here today, Mary Ellen!

MEH: Great to be here, Lisa!

LKBR: Please tell us a bit about the Keepsake Cove series.

MEH: Keepsake Cove, on Maryland’s Eastern Shore, is lined with charming and unique stores that each carry a particular collectible. Callie Reed inherited her aunt’s collectible music box shop (and the fairy tale-like cottage behind it).  Her first challenge (in A Fatal Collection) was proving that her aunt’s death was not accidental but murder. Her second task (in A Vintage Death) is proving the innocence of a fellow shop keeper when the victim was murdered with that shop keeper’s vintage scissors.

Added to that, Callie’s late Aunt Mel seems to be communicating through her favorite music box, setting it to play, somehow, as a warning or confirmation of a clue. Or is she? Callie goes back and forth on that one.

MEH: I’ve always loved browsing through unusual and intriguing shops, so the thought of creating an entire town of such shops was too tempting to ignore. Adding a murder or two just came naturally, along with the hint of paranormal.

MEH: In A Vintage Death, I brought in Lyssa Hammond, a top-selling suspense author who joined forces with Callie in solving the murder. I’m bringing her back in book 3 (A Curio Killing) partly at the request of my critique group who really enjoyed her character. (So did I!)

MEH: Probably my husband, who had to read my first attempts at fiction (poor guy!). After that it was other writers, then publishers.

MEH: Sometimes it’s hands on. When I wrote the Craft Corner series, I learned how to make many of the things described in the books (wreaths, beaded jewelry, etc.) More often it’s looking things up online, such as information on bail procedures and so on, or picking the brains of various experts.

MEH: I write in the morning and generally quit by lunch time. No word count goal. I have a spot upstairs by a window that isn’t too distracting but looks out on trees, birds, and occasional deer.

MEH: I pick character names very carefully. They have to fit. So I look through baby-naming books and on the social security list of popular names by decade. Sometimes they get changed a few times until I’m satisfied. (Thank goodness for “find and replace!”)

MEH: I usually run male characters by my husband for credibility. My critique group helps a lot, too, such as when I once had a male character “trot across the street.” I was advised to change that to “jogged,” which sounds more masculine.

MEH: I get some of my best plot ideas while driving our riding mower; I once was an avid sewer (made a daughter’s prom dress—and she liked it!); I can never remember how to spell hors d’oeuvres (and spell check doesn’t either!).

LKBR: Thank you so much, Mary Ellen for letting us get to know you better!

MEH: Thanks for the opportunity, Lisa! It’s always fun to be here. 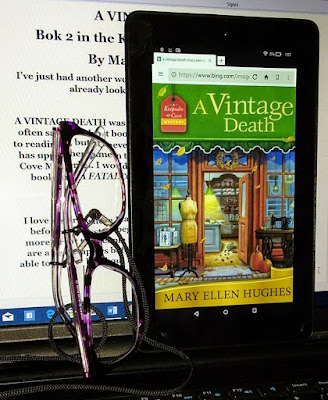 I’ve just had another wonderful visit to Keepsake Cove and I’m already looking forward to my next trip!

A VINTAGE DEATH was a book impossible to put down. I know I often say that about books I read (What can I say? I’m addicted to reading!), but it’s never been truer. Author Mary Ellen Hughes has upped her game in this second installment of her Keepsake Cove Mysteries. I wouldn’t have thought she could have topped book one, A FATAL COLLECTION, but I really should have known better.

I love a story where I can spend some time with the characters before the mystery begins. It’s a great chance to get to know more about the people involved. In A VINTAGE DEATH, there are a few chapters before the discovery of the body, and I was able to learn a bit about Keepsake Cove, and its merchants. Now, on to the mystery . . .

There are not one, but two murders in this story, with each victim being killed by a unique choice of weapon, vintage sewing scissors. It was very intriguing searching for the who and why of it all. Like knotted thread, unraveling the true truth wasn’t an easy task. But author Hughes expertly ties everything together in a reveal that had me riveted to my seat.

Mary Ellen Hughes is the bestselling author of the Pickled and Preserved Mysteries (Penguin), the Craft Corner Mysteries, and the Maggie Olenski Mysteries, along with several short stories. A Fatal Collection is her debut with Midnight Ink. A Wisconsin native, she has lived most of her adult life in Maryland, where she’s set many of her stories.