Zoe Chase always wanted to own her own restaurant—but first, she'll have to serve up a heaping helping of meals on wheels, with a side of mystery…

When she’s once again passed over for a promotion at work, Zoe decides to take the big leap and go for her dream. She quits, gives up her fancy digs, and buys a fixer-upper diner in a shady part of town. To keep above water during the renovation, she buys a used food truck to serve the downtown and waterfront of Mobile, Alabama.

Zoe starts to dish out classic Southern food—but her specialty is her deep-fried biscuit bowls that blow traditional bread bowls away.

After a promising start, things start to go downhill faster than a food truck without brakes. First, someone tries to rob the cash register. Next, Zoe is threatened by the owner of a competing food truck for taking their spot. And when the owner ends up dead inside Zoe’s rolling restaurant, Zoe and her sole employee, Ollie, find themselves hopping out of the frying pan into the fryer. They need to find the real killer, before both of them get burned. 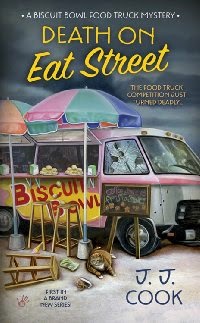 I have wanted to read this book since I first saw the cover of it online. Add the fact that it's written by J. J. Cook, a.k.a. Joyce and Jim Lavene, and I just knew it was going to be great. I was right!

The action starts off very soon into the book and just keeps going. You'll find that just when you think you have something figured out, you're thrown a curve and have to rethink everything. the mystery just keeps growing until the surprising reveal.

Zoe Chase is a very likeable lead character. She did what we have all dreamed of doing. Quit her unsatisfying job to follow her dream. While reading this story, told by Zoe herself, I was so drawn into it that I felt as though I was living it myself. My favorite parts were the ones when Zoe and friends were working in the food truck. As for those friends, the supporting cast of characters were very different in many ways than I have read in other cozies. That only strengthened their appeal. They added a fresh flavor that kept me completely entertained.

And speaking of flavor, you are going to be so hungry for biscuits while ready this! It's a good thing there is a recipe for biscuit bowls included, along with some of their mouth watering fillings!

DEATH ON EAT STREET is the perfect book to kick start the Biscuit Bowl Food Truck Mystery series. It has insured this will be a series that will continue for many years to come!
Posted by Lisa Ks Book Reviews at 3:58 PM