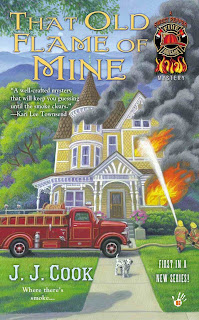 That Old Flame Of Mine by J. J. Cook #1 in A Sweet Pepper Fire Brigade Mystery
﻿
When Chicago fire fighter Stella Griffin catches her boyfriend cheating on her, she decks him. Between that and recovering from a shoulder injury, Stella needed a change of scenery. Jumping on her Harley she heads to help the town of Sweet Pepper, Tennessee get it's fire brigade back up and running as their temporary fire chief. The brigades first official call is to the home of Stella's friend Tory Lambert, who tragically is found dead in her burning house. Things don't look right to Stella. Did Tory die of foul play in an arson fire?

Sweet Pepper's old fire chief is helping Stella with her investigation, but there's one catch - Chief Eric Gamblyn is a ghost! Stella has to stay focused, but it can be hard with ghost Eric and police officer John Trump, who has more of an interest in her than just being one of her volunteer fire fighters, vying for her attention. But Stella has to find a killer before she's the next to die.

Author J. J. Cook - AKA husband and wife team Jim & Joyce Lavene, have a real winner on their hands.This is a fantastic book!.I wasn't sure at first that I would like a ghost with my cozy (though I love ghost stories and watch true ghost shows), but it worked and I really enjoyed it.

Stella is a strong protagonist and not only because she's a fire fighter. She's intelligent and insightful, as well as kind and caring. I love that she has the respect of her volunteer fire fighters. Many stories would have at least one or two men disrespecting her authority what with it being a small town. I also like the way she excepts ghost Eric Gamblyn. If all ghosts were like him, I'd want one too! Eric is a good sounding board for Stella. The two play well off each other. Policeman/fire fighter John Trump's feelings for Stella are at war with his feelings for her family, but he seems a good pairing for her. And with a supporting cast of fire fighters Ricky, Petey, Banyin, and Bert, local war hero Tagger, Police Chief Rodgers, who is not a supporter of Stella, and a host of Sweet Pepper locals, THAT OLD FLAME OF MINE is a must read and has left me burning for more!


ATTN: Recipe lovers - Look for the great pepper recipes at the back of the book!
﻿
﻿