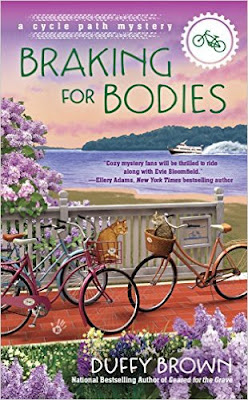 Evie Bloomfield puts the pedal to the metal—in the latest Cycle Path mystery from the national bestselling author of Geared for the Grave. Moving from Los Angeles to small, picturesque Mackinac Island to work in a bike shop might seem crazy, but Evie knows it’s the best decision she’s ever made. That’s not to say she’s gotten rid of all her stress; after all, the upcoming Lilac Festival has everyone in town riding in circles. But things really go downhill when a ferry full of tourists—including Evie’s friend Fiona’s former boss, the editor of a sleazy rag in LA—arrives on the island. No one knows why Peephole Perry came all the way to Mackinac, but things aren’t looking good for Fiona when Peep is found dead. Now Evie has to gear up and get a grip on the truth if she wants to clear her friend’s name... 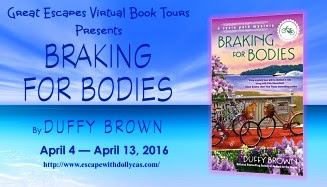 Tucked away on the western tip of Lake Huron sits Mackinac Island, an eight-mile chunk of land steeped in mystery, lost in time, where there are no cars, only horses and bikes and where Braking for Bodies is set.

When you take an island that essentially amounts to a giant Native American burial ground, build a fort on it, fight battles then turn it into a tourist destination you get an island filled with so many ghosts it would be difficult to list them all but here are a few.

At the grand Grand Hotel there are countless tales of love affairs gone wrong. To mark the occasion some have seen a man in a top hat frequenting the second floor bar’s piano where ledged has it his wife left him for the piano player. Mr. Top Hat is still waiting for his wife to come back and if you’re lucky...or unlucky…you can catch the lingering scent of his cigar.

Another occur ace is a woman in Victorian clothing that tends to roam the hotel’s employee housing. Rumor has it her rich lover promised to leave his wife for her, never did and she’s still waiting.

Fort Mackinac had its share of battles and today…on occasion…one can catch a glimpse of soldiers walking the Rifle Range Trail. Some have even seen piles of phantom limbs in the fort hospital…yikes!...and then there’s the furniture that moves on its own, tripping motion detectors in Officer Hills Apartment Quarters.

At least thirteen children died at the fort from Typhoid Fever, Tuberculosis, and other diseases. Sometimes visitors hear the cries of children echoing through the halls where they once lived.

Mission Point Resort located on the eastern tip of the island is so haunted, that it drew the attention of SyFy’s Ghost Hunters who filmed an episode there in 2010. The Murray Hotel had a fire in the ‘60s where a young girl died. More than one visitor has seen her sitting at the foot of their bed.

So what about you? Have you ever visited a place that was supposed to be haunted? Did you see anything unusual? Have you ever taken a ghost tour? And the biggest question is…do you believe in ghosts?

*****!!!GIVEAWAY!!!*****
Prizes will be shipped after April 13
at the end of the tour
Two lucky winners will when this great
BRAKING FOR BODIES Tote! 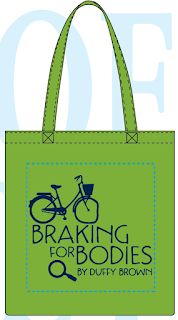 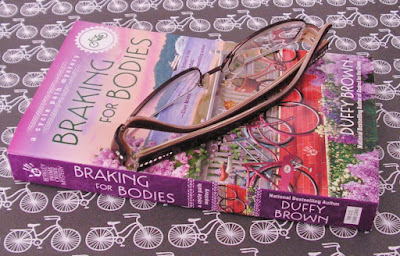 I cycled through this fabulous mystery at record speed. What a fun ride it was!

Cozy mystery readers were given a marvelous gift when author Duffy Brown came on the scene. All you have to do is read BRAKING FOR BODIES to see just how blessed we are.

Set on real life Mackinac Island (Have you ever seen Somewhere In Time?), the Cycle Path mystery series will pull you in with Ms. Brown’s descriptions of this beautiful setting. It’s clear she has a real love for, and vast knowledge of Mackinac. The Grand Hotel is featured in this story, and it has strengthened my resolve to get there one day.

With a fantastic plot that had me from page one, BRAKING FOR BODIES as a fast, funny mystery that had me on the edge of my seat with anticipation as well as laughing practically through the entire book! Duffy Brown knows just the right combination of mystery, intrigue, and humor to make up the perfect cozy mystery.

If you’re thinking of getting BRAKING FOR BODIES, stop back peddling. Throw yourself in gear, and race to get your copy! 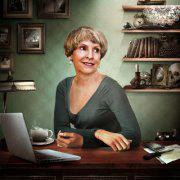 Duffy Brown loves anything with a mystery. While others girls dreamed of dating Brad Pitt, Duffy longed to take Sherlock Holmes to the prom. She has two cats, Spooky and Dr. Watson, her license plate is Sherlok and she conjures up who-done-it stories of her very own for Berkley Prime Crime. Duffy's national bestselling Consignment Shop Mystery series is set in Savannah and the Cycle Path Mysteries are set on Mackinac Island 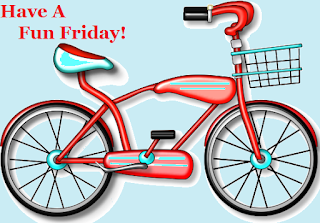