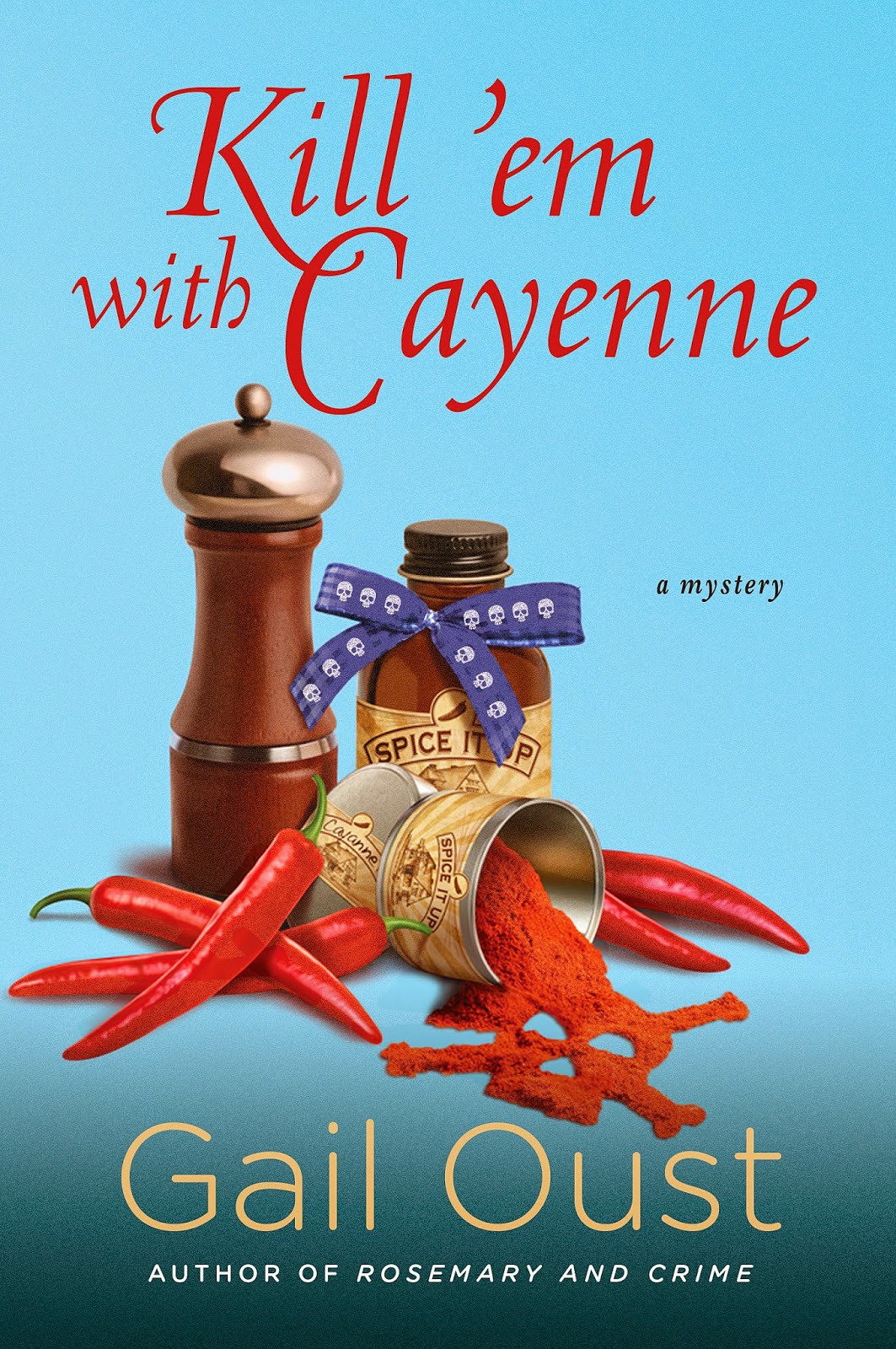 Kill 'Em with Cayenne, a brand new finger-lickin’ good mystery from Gail Oust, featuring small-town Georgia spice shop owner Piper Prescott, a smart and spunky amateur sleuth.Spices are flying off the shelves of Spice It Up!, and Piper Prescott couldn’t be happier. It’s that time of year again—time for the annual Brandywine Creek Barbecue Festival. Soon contestants and BBQ aficionados from all over the Southeast will converge on the town. Many of Brandywine Creek’s citizens plan to participate in the week-long festivities and are busily concocting savory rubs and sassy sauces. Among the locals vying for the grand prize are Becca Dapkins and Maybelle Humphries. The women have been arch enemies ever since Buzz Oliver dumped Maybelle after a thirteen-year courtship and started seeing Becca. When Becca’s body is found near one of the festival booths, bludgeoned by a brisket, Maybelle becomes one of Chief Wyatt McBride’s top suspects. Determined to help clear her friend’s name, Piper begins her own investigation, much to McBride’s consternation. As the festival draws closer, will Piper and Reba Mae be able to find the real killer and clear Maybelle’s name? Will Piper make it to the annual shag contest with Doug Winters, the mild-mannered vet she’s been seeing? And, who will win the BBQ cook-off?

On choosing titles for her books

I have a confession to make.  It was easier naming my children than coming up with a title for a book.  For me, it’s easier to write an entire book than finding a title.  In fact, most things are easier for me than finding the perfect title.  I agonize over each possibility.  I keep a running list of silly, serious, or just plain stupid contenders.  I throw myself on the mercy of my clever editor and my amazing agent.  I beseech friends and acquaintances for suggestions.  I consider ideas that are brilliant, semi-brilliant, or dumb.  Finally, desperation sets in which threatens to blossom into flown blwn panic.   I don’t know if other writers suffer from this dilemma.  I hope so since, to borrow a cliché, misery loves company.  As of this moment, however, I don’t know of any others.

Case in point, take my track record with the Spice Shop Mysteries.  The first in the series started out as Spice ‘n Deadly.  Edits were all finished when I learned the powers that be didn’t like the title.  They thought it might be confusing since it’s not a direct play on a common phrase.  They wanted one that would more strongly capture a reader’s attention.  And, by the way, I was told that they loved Grillin’ and Killin’ for the second book.  They noticed I had A Corpse in the Cardamom listed for a future book and thought that might work.  It didn’t seem to matter cardamom was never mentioned.  E-mails sailed back and forth like heat-seeking missiles.  Ideas such as Rub, Roast, and Murder, Salt, Pepper, and Kill, and Mutton Can Be Murder were all shot down.  Juniper, Rosemary, and Crime was eventually chosen but shortened to Rosemary and Crime.  I diplomatically pointed out rosemary was technically an herb not a spice, but no one seemed to mind.

Remember how the “powers that be” loved Grillin’ and Killin’ for the second book that featured a barbecue festival?  Well, Grillin’ suddenly became Kill ‘em with Cayenne.  I admit I love the title, I really do.  It works perfectly against the backdrop of a barbecue festival.  Kind of wish I’d thought of the idea myself.

Duh!  I finally got the message.  They want a spice in each title which should be a shoo-in for the third book I had in mind for the series--A Corpse in the Cardamom.  I made sure cardamom was mentioned repeatedly throughout the book and featured in certain recipes.  I found a great gingersnap recipe with cardamom in it that would even pass muster with Piper’s ex mother-in-law, Melly Prescott. Well, as you might suspect, there’s been a change in plans. Cardamom, I was informed isn’t a spice which many are familiar.  Cardamom is out; cinnamon is in.  Watch for Cinnamon Toasted, December 2015.

Fortunately the problem will continue as I begin work on the fourth book.  Already I can feel the tension mounting as I rack my feeble brain for a clever, punny title which is a “direct play on a common phrase.”  I’ll worry about the plot later.  Title comes first.  Suggestions anyone?

What do you think?
Any spicy title suggestions for Gail? 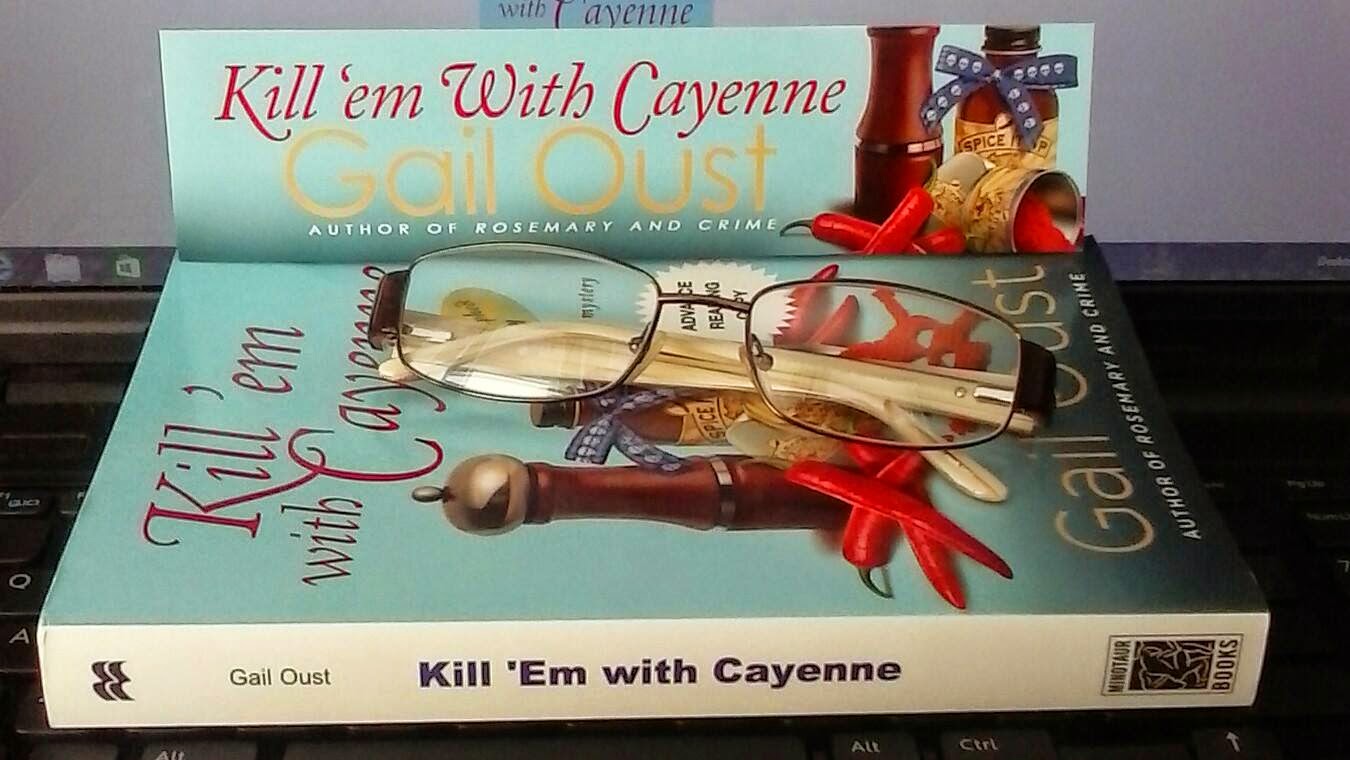 I was sent an advanced reading copy of KILL ‘EM WITH CYENNE in exchange for a review. That being said, I’m thrilled I was given the chance because I really liked this book! Now I need to go back and read the first book in this Spice Shop Mystery series, ROSEMARY AND CRIME.

I found protagonist Piper Prescott to be very witty and enjoyable, and I loved the story being told through her narrative. The supporting characters in this southern cozy are well done and perfect for the setting.

Ms. Oust wastes no time getting to the ‘finding of the body’ in this book, which ensures you’ll never have the chance to become bored. There are plenty of plot twists and turns to keep you guessing until the exciting reveal.

Included at the end of the book is a Guide To Peppers and three mouthwatering recipes.

Spice up your library with KILL ‘EM WITH CAYENNE. You’re sure to savor it as much as I did!

Enter to win an autographed copy of
KILL 'EM WITH CAYENNE

a Rafflecopter giveaway
Posted by Lisa Ks Book Reviews at 12:00 AM