BLOOM AND DOOM by Beverly Allen. Book #1 in A Bridal Bouquet Shop Mystery

As the co-owner of The Rose in Bloom, Audrey Bloom creates magnificent flower arrangements for brides to be. Though helping to plan a wedding can be stressful, it’s nothing compared to the groom turning up dead.

A designer of eye-catching bridal bouquets—many of them based on the Victorian meanings behind each flower—Audrey Bloom is used to celebrations that end with happily ever after. In fact, every couple she’s worked with is still together, living in wedded bliss. But her perfect record is about to be broken.

Her childhood friend Jenny Whitney has reeled in the most eligible bachelor in Ramble, Virginia, and she’s hired Audrey to design the bouquet. But before Jenny can walk down the aisle clutching her blend of anemone, scabious, and pussy willow (a floral disaster in Audrey’s mind), the groom is found dead—sprinkled with bits of a bouquet. This is bad for business—not to mention for Jenny, who has become the prime suspect. So Audrey decides to do a little digging herself, hoping she won’t be the next Ramble resident pushing up daisies… 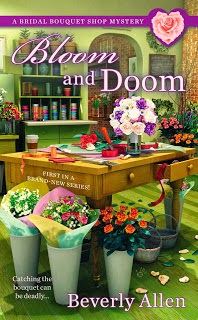 BLOOM AND DOOM is the first book in A Bridal Bouquet Shop Mystery series by author Beverly Allen. I was privileged enough to read this story before the April 1, 2014 publication date. This book had me at the first page!

In meeting Audrey Bloom and Olivia “Liv” Rose, her cousin and co-owner of the Rose In Bloom florist shop in Ramble, Virginia, I immediately felt I was in the presence of dear friends. In getting to meet the other characters, several of which worked or helped out at the shop, I found myself wanting to work there as well and get to spend my days among the flowers and good company.

The entire story was fast paced and never lacking action. Some situations had me honestly laughing out loud due to the author’s witty humor and fun writing flare. I also found it informative as Ms. Allen had Audrey telling the meaning of the flowers she would use in her different arrangements.

As for the mystery aspect of this cozy, it was handled superbly. I was guessing until the very end as to who the murderer was. There was a bit of a “sub mystery” in the storyline as well. Something I feel the author intentionally made us forget about after it was mentioned, just so she could catch us off guard when it finally came to light. Well played Ms. Allen!

If you’re anything like me, you’re always on the lookout for new series that will become one of your go to favorites. Beverly Allen’s Bridal Bouquet Shop Mystery series is that series for me and I have no doubt it will be for you too. This one is sure to be a long running series indeed!
Posted by Lisa Ks Book Reviews at 4:48 PM