Deathbed & Breakfast Review
Cover blurb: Richard Forester, a retired CEO for a major software company, and his granddaughter Penny show up at the Pookotz Bed & Breakfast one evening and find themselves in some rather unpleasant company. All the guests somehow seem to be connected to Richard’s past and when he is found dead the next morning, everyone is suspect. However, there are a few wrinkles that the inn’s owners Edna and Mildred Pookotz need to iron out as the murder investigation unfolds. Not only was Richard deathly ill, but he was also accused of embezzling $750,000 which is still unaccounted for. The local Sheriff suspects that this victim’s death is not a natural one, so he--and the sisters--set forth to discover who the murderer is.

There are plenty of twists and turns in this first 'whodunit' of the Pookotz Sisters Bed & Breakfast Mystery series which introduces you to the quaint mountain Oregon town of Pleasant Lake and its inhabitants.

​Readers of the cozy mystery genre will fall in love with Edna and Mildred Pookotz, sisters and amateur senior sleuths, as they juggle the responsibilities of running a Bed & Breakfast and solving most bizarre mysteries!
Mr. Gilbertson has some story here. While reading it, the movie "Clue" kept coming to mind, because everytime I thought I had it figured out, a new twist would come along. Such an amazing aray of characters. In meeting each one, I thought that person could be the killer. I can honestly say I didn't see the end coming.

I'm left wondering what the Pookotz sisters will have waiting for them in Mr. Gilbetson's next installment!

Readers of a good old fashioned mystery should really love this book. 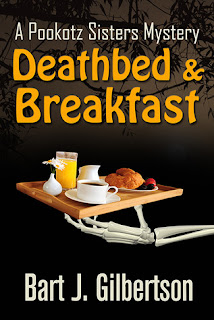 Interview with author Bart J. Gilbertson
LKBR:  When did you decide you wanted to be a writer?

BJG:  I've been writing stories for as long as I can remember.  I got my first taste for books when I was in 5th Grade when I was 10 years old.  My teacher, Mrs. Moser, introduced me to the Prydain Chronicles by Lloyd Alexander, a 5 book young reader fantasy series.  Never before had I been so enamored with books as I was when I read those.  I still read those books every once in a while to this day!  Then a year later, I began to read the Hardy Boys mysteries and that just further fueled my fire. I would have to say that was about the time I decided that someday, I was going to become a novelist too.  So I began to write all sorts of stories. 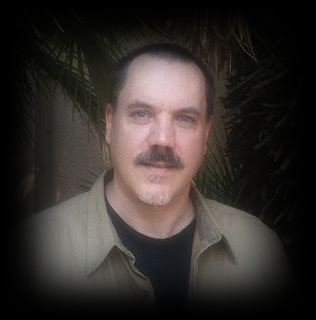 LKBR:  Where did you get the idea for the Pookotz Sisters Mysteries?


BJG:  About 3 years ago, I was visiting my sister and her family and we were up late one night just talking, catching up on things.  She is an avid cozy mystery reader and she was telling me about a book she was reading at the time by Joanne Fluke.  After a while, we just started coming up with ideas for our own setting and characters for a cozy mystery series.  Joking around, making up humorous situations and having a good time.  And the Pookotz Sisters were born!  Within 2 or 3 days, I began to lay down the groundwork for what would become the first book in the series, Deathbed & Breakfast.  About 18 months later, I had the novel completed and the first edit done. Then after sending out numerous queries, Cozy Cat Press loved the manuscript and signed me to a contract about 1 month ago. 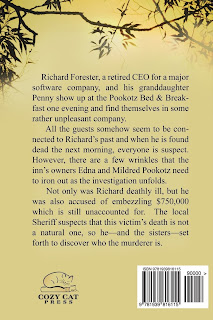 LKBR:  Are any of the characters in your story based, evenly loosely on someone you know?


BJG:  Yes!  Both real and fictional.  There are a lot of references in Deathbed & Breakfast, both obvious and hidden.  The two sisters are not based on actual people, but I always envisioned (if adapted for the screen)  Maggie Smith playing the part of Edna and Betty White the part of Mildred. There is a character mentioned in the book whose name is Rusty Barton and he is roughly based on my best friend, Dustin Barton. Sam was a character in Alfred Hitchcock's "Psycho" and influenced Sam in my book. Also when Edna asks if Jim's wife Regina's maiden name was Saunders and he says 'No' that it was Sullivan...that was taken from the Goldie Hawn movie "Deceived". In that movie, she finds out that her husband's real name isn't really Saunders, but that it is Sullivan. Also, in the TV show "Charlie's Angels", Kate Jackson played the part of Sabrina. I took Kate's last name and put it with Sabrina as her real last name of Sabrina Jackson. When Gwen and Sam make fun of putting Richard with Richards for the name Richard Richards, that was based on the fact that I actually knew someone named Thomas Thomas. He played football for the Idaho State Bengals as an offensive lineman back in about 1986.  The other players used to call him T2 or 'T-Squared'. And finally, the obvious reference was Nurse Ratched from One Flew Over The Cuckoo's Nest. 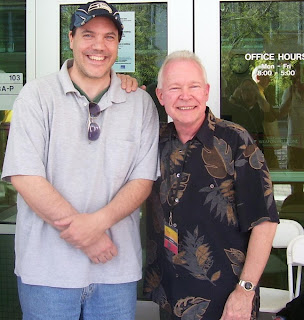 LKBR:  Have you started working on a second book in the series? 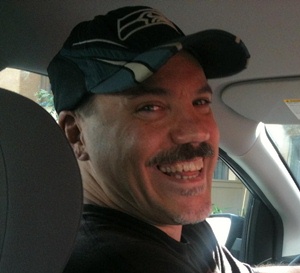 LKBR:  Any ideas for a new series or stand alone book?


BJG:  I have SO many ideas.  I do have an idea for a new series called The Ghost Mirror Mysteries. This particular series would touch more on the paranormal side.  Kind of "paranormal meets cozy" mystery.  A woman purchases an older victorian home located somewhere in the New England area, and while renovating it, she finds a body length, stand-up mirror in the basement.  A ghost appears to her in the mirror and leads her to solving that ghost's murder (as it went unsolved previously).  The idea of the series, is that a different ghost appears to her in the mirror to solve different mysteries in each book.  I have several ideas for stand alone novels as well as short stories.  I will have a book compiling 4 short stories coming out soon for kindle only.  It will be titled "Wax Hypnotic ...and other tales from beyond".  One idea I have for a stand alone novel involves time travel!  That one will be fun. 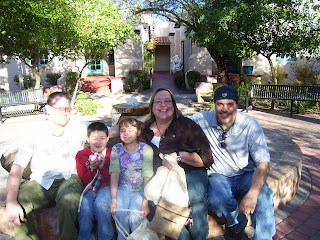 Bart (far right) with sister Billie and her family

LKBR:  Is there anything else you would like our readers here to know?


BJG:  I am finding that being a published author has included me in a great new family where everyone has been SO kind and helpful to me.  Authors are truly a rare breed, and I am proud to call myself one.  I want to especially thank my sister, Billie for all of her support and help through the past few years.  I can honestly say that Deathbed & Breakfast would have never happened if it weren't for her to help motivate me.  Please stop by my (work in progress) website at http://bjgilbertson2.wix.com/bartjgilbertson  You can also find Deathbed & Breakfast on both Amazon and Barnes & Noble in paperback, and in electronic format for your kindles here http://www.amazon.com/Deathbed-Breakfast-Pookotz-Sisters-ebook/dp/B00DUGZHYK/ref=sr_1_1?s=books&ie=UTF8&qid=1373409813&sr=1-1


The response to the book has been wonderful with all favorable reviews.  I hope you enjoy your time with the Pookotz Sisters in Deathbed & Breakfast!
Thank you so much Bart! Here's wishing you a long and happy writing career.